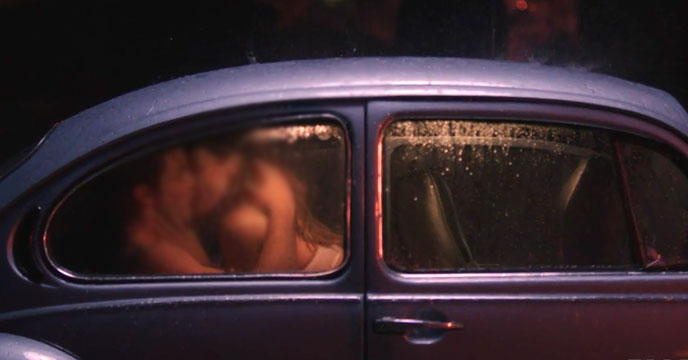 “Do you really think I should drive now when you have already driven me mad?”

Amit pressed her with his chest, looked straight into her eyes and said.

His look was so intense as if he was stealing her body with his eyes.

Renuka tried to avoid his looks and said,

Before she could utter anything more, Amit shut her mouth with his right palm and thrust a finger on her wet slit giving her a sudden jerk. She struggled with both her hands to put his hand away from her mouth. But Amit was adamant to put his force on her, although he was careful not to hurt her.

She put his finger in and out making her breaths heavy and eyes wide open.

“I am listening to the command of your heart and your burning hot pussy sweetheart…Let me obey…” Amit smiled and thrust two fingers in her crack and played with her wetness.

Renuka struggled to free her mouth. Her hands were still, as she was stuck between forbidding his fingers to please her, or let him play. Her body shivered as he continued to push in and out. His mouth grabbed her exposed breasts eating her hard buttons and his tongue whirling around her huge swelled hills.

Amit could see her desire rising to the peak and at the same time her ego not letting her give up. He put his three fingers into her touching her g-spot and released her mouth to hear her moans. She breathed heavy screaming,

He laughed and kept thrusting his fingers in and out making her body uncontrollable. Her body couldn’t find any strength to push him away as his mouth wrapped her lips.

He kept playing with her wet clit holding her hands tight on the bonnet and whispering,

He kept repeating with his fingers constantly enjoying the game of in and out.

“Drive you or your car?”

Without letting het speak further, he pounced on her lips again rolling his tongue inside. He suddenly picked her up, kissing her bare breasts and threw her in her seat.

She stood still breathing high wanting him not to stop his game. But Amit wanted to see her in despair in desire.

“Not until you beg me bitch…” Smilingly, Amit took his driver seat and ignited the car engine.

“Where are you heading to?” Renuka asked.

He took the car ahead keeping an eye on her heavy breaths and desirous eyes.

“You won’t find any road ahead…” She said.

“Who is looking for any road?” Amit responded.

They reached a point where there was no road ahead but surrounded by huge trees. It was pitch dark with only the car lights bearing the silence of the jungle.

“Will you now come out of the car, or should I pick you out?” Amit asked.

“What are you upto?” Renuka asked back.

“I am in the mood of following your heart’s command.”

Saying this, he got out of the car and walked towards her door. He opened the door and pulled her legs out spreading them apart. He bent down and slurped her juicy clit. He pushed his tongue inside her entrance, swallowing her pink juicy petals. He fucked her with his tongue till she screamed his name,

She pulled his hair but was not able to release herself from his strength. She was as if without any strength giving up all her commands. He suddenly pulled her out and opened the door of the back seat pushing her with a thud on the seat. He grabbed her breasts and climbed on her with his tight hot manhood reaching her mouth. He sat on her face forcing his manhood into her mouth. She had no way but to swallow his thick long weapon with her tongue tasting every bit of him. Her mouth took it in and out, with her tongue licking his testicles. She gently swallowed his two soft bollocks making him repeat her name,

“You are awesome, Renuka…I can fuck you for my entire life…I will…trust me…”

He came down kissing her neck, and below with his fingers still playing with her wet clit.

Amit thrust his thick manhood inside her with a force giving her the ultimate pleasure she had been desiring for.

Her palms ran up and down his chest, and her tongue licking his small tits. He panted, gripping her ass and lifting her to grind harder and harder. Her legs locked around his waist and the game of in and out ran faster and harder. He felt his manhood pulsing, her walls squeezing letting him release inside her.

He clung in between her legs kissing her lips, her breasts, till his hardness limped.

He cried, “Renuka…it was fucking awesome…”

Renuka lay still in silence looking at him with her hands around his neck.

“I would love to fuck you again and again…” Amit said caressing her cheeks and biting her chin.

Renuka laughs out and says,

“Would you come to meet me again just to fuck me?”

“I am not letting you go, nor I will stay away from you, you damn girl…” Amit held her neck tight and spoke on her face with a harsh tone.

“Damn you…life is not just about fucking you. I love you…you, silly little creature.”

He shouted on her face.

She pulled him and forced her lips on him without saying any word.