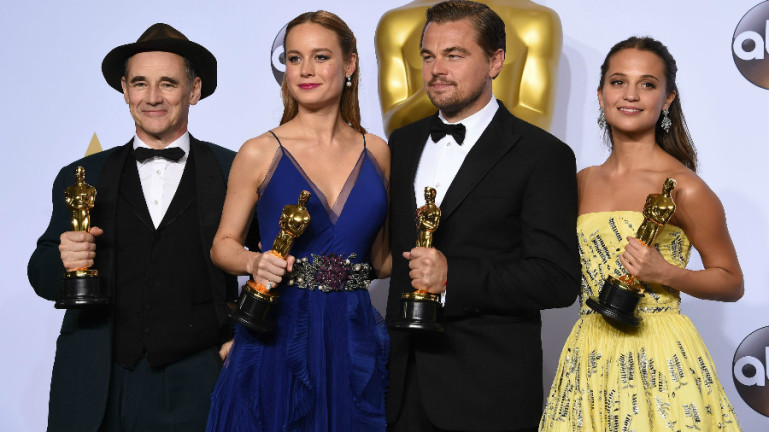 Oscars 2016 live: Leonardo Dicaprio has won his first Oscar for The Revenant and Priyanka Chopra has made her debut on Oscars red carpet. (Source: Reuters)

Oscars 2016 Live was held in USA at the famous Dolby Theater. Priyanka Chopra rocked the red carpet in a white Zuhair Murad gown, presenter Chris Rock opened the show with his monologue. Leonardo Dicaprio broke the Oscars jinx and bagged his first Best Actor Oscar for his role in ‘The Revenant.’ Brie Larson, who was nominated for the first Oscars, won Best Actress for her role in The Room.

Alicia Vikander has won Best Supporting Actress for her role in The Danish Girl and Mark Rylance has won Best Actor in a Supporting Role for Bridge of Spies. Mad Max: Fury Road is leading with six Oscars. Here’s how it happened at the Oscars red carpet and inside the theatre.

Priyanka Chopra at Oscars backstage having some fun. A look.

10:22am: Best Actor in a Leading Role: Leonardo Dicaprio, The Revenant

10:13 am: Eddie Readmayne, nominated for Best Actor, on stage to announce the winner of Best Actress tonight

9:57 am: Sam Smith dedicates his Oscar to LGBT community

9:55 am: Common and John Legend to present Best Original Song

9:54am: Joe Biden shares a picture with the Ladies

9:40 am:  US Vice President Joe Biden on stage to introduce Lady Gaga’s performance tonight. Gets a rousing welcome 9:24 am: Special performance In Memorian – Saeed Jaffrey paid tributes at the Oscars

9:21 am: Cheryl Boone Issacs, Director of Academy Awards on stage

9:17 am: Rylance was a first time nominee and won Sunday for his portrayal of Russian spy Rudolf Abel, who becomes part of a high-stakes prisoner exchange during the Cold War between the United States and Soviet Union. The actor praised director Steven Spielberg and co-star Tom Hanks in his acceptance speech, which was cut short by the orchestra while Rylance was praising his fellow nominees.

9:13 am: Another Indian connection at Oscars, Asif Kapadia wins Big

9:11 am: Dev Patel on stage to present Best Documentary Feature

9:07 am: Best Documentary Short Film to be announced shortly

9:03 am: Mark Rylance says it is a wonderful time to be an actor

9:00 am: Best Actor in a Supporting Role: Mark Rylance, Bridge of Spies

8:52 am: Will Sylvester Stallone win the coveted #Oscars..Will know in a few minutes from now.

8:45 am: The Weeknd is performing Earned It

8:42 am: Girl Scouts sell cookies in the audience at the Oscars. 8:41 am: Best Animated Feature Film: Inside Out

8:40 am: Best Animated Feature Film : Buzz Light Year and Woody from Toy Story are on stage to present the award. Photos: Big Winners at Oscars 2016

8:37 am: Minions on stage and present the Best Animated Short Film to Bear Story Priyanka Chopra, left, and Liev Schreiber present the award for best film editing at the Oscars on Sunday, Feb. 28, 2016, at the Dolby Theatre in Los Angeles. (Source: AP)

8:18 am: This is Margaret Sixel’s first Oscar and it is the fourth Oscar of the night for Mad Max Fury Road

8:08 am Priyanka Chopra and Liev Schreiber on stage to present an Oscar in Film Editing

8:07 am This is the first award of the night for The Revenant

8:06 am: Achievement in Cinematography: The Revenant, Emmanuel Lubezki.

8:04 am: Rachel Mc Adams of Spotlight on stage Michael B Jordan on stage to present Best Cinematography

7:59 am: Jennifer Garner looks pretty in black as she introduces Best Picture nominees Benicio del Toro, left, and Jennifer Garner speak at the Oscars on Sunday, Feb. 28, 2016, at the Dolby Theatre in Los Angeles. (Source: AP)

7:57 am: This is the third Oscars for Mad Max: Fury Road tonight.

7:51 am: Tina Fey and Steve Carell on stage to present Best Production Design

7:48 am: Cate Blanchett, who has won 2 Oscars and is nominated for the 7th time, is on stage to present Best Costume Design

7:41 am: Alicia Vikander wins Best Actress in A Supporting Role. It was her first Oscar win and nomination. The Latest on Oscars 2016 (88th annual Academy Awards) being presented Sunday at the Dolby Theatre. Priyanka Chopra who made her debut on the Oscars red carpet is yet to present an award. But we have two early winners at the Oscars. Here’s a complete list of the winners:

J.K Simmons on stage to announce Best Actress in A Supporting Role

7:20 am: Russell Crowe, Ryan Gosling are on stage to announce the Best Adapted Screenplay.  Russell has won Two Academy Awards.

7:18 am: This is the first award of the night, first for Spotlight Oscars 2016 live coverage: Priyanka Chopra is rubbing shoulders with the who’s who from Hollywood. (Source: AP)

7:15 am: First award of the night is being announced by Charlize Theron: Best Original Screenplay.

7:11 am: We have a lot of  snubs this time at Oscars. We also want equal opportunities for Black., says Chris Rock in his monolgoue. Chris Rock: They ask the men more because they are wearing all the same so they ask them more.

7:06 am: Jada Pinkett Smith boycotted Oscars but I wonder why?

7:03 am: Oscars 2016 host and funnyman Chris Rock opens the show. He says “I  am Academy Awards, otherwise known as the White People’s Choice Awards. I thought about quitting the Oscars, last thing I need is to lose another job to Kevin Hart.”

7:00 am: Priyanka Chopra is garnering all the praises back home. She looks lovely and says feels like a ‘princess’.

6:55 am: I wasn’t aware of how spotlight operates and how independent it was, says Mark Ruffalo 6:40 am: Priyanka Chopra says namaste India all the way from Oscars red carpet. Priyanka Chopras namaste to Indian fans back home all the way from Oscars red carpet.

6:33am: Leonardo Dicaprio is on the red carpet. He is nominated Best Actor for his role in The Revenant and is most likely to win the Golden Statue this year. Leonardo DiCaprio, nominated for Best Actor for his role in “The Revenant,” arrives at the 88th Academy Awards. (Source: Reuters)

6:29 am: Oscars host Chris Rock goes through his dialogues.

6:24 am: Lady Gaga, who is also making a performance at the Oscars tonight, is ravishing in a white strapless gown. Lady Gaga, who has been a survivor of sexual violence says she is excited to be part of the show. 6:22 am: Sylvester Stallone, who has been nominated for The Creed and is the top contender for winning Best Supporting Actor is on the red carpet.

6:17 am Cate Blanchett looks amazing as she arrives on the red carpet.

6:16 am: Oscar winner Louis Gosset Jr’s advice for younger actors- bring your A game out. 6:13 am: Julianne Moore is dazzling in black gown at the Oscars red carpet. I loved many films that have been nominated, I love Brooklyn.

6:10 am: Matt Damon sends his greetings out to his nephews Troy and Jack from the red carpet.

6:07 am: Jimmy Kimmel on the stairs of  Dolby theatre as he makes an entry before the big award show.

5:55 am : Eddie Readmayne, nominated as Best Actor for The Danish Girl, is on the red carpet.

5:54  am: Cheryl Boone Isaacs talks about Oscars diversity. We are going to continue take actions,

5:45 am: The uber cute and talented child actor Jacob Tremblay of The Room is all excited abou

5:43 am : Brie Larson, who has been nominated for Best Actress performance in Room is on the red carpet. Priyanka Chopra in white at Oscars Red carpet Host: The maverick Chris Rock will be taking centerstage as the host tonight. Known for his acerbic humour, Chris has already set tongues wagging by taking the Oscars head on with his tweet, ‘The #Oscars. The White BET Awards. The issue relates to the controversy generated over the lack of non-white people in any of the nominees’ list for the last two year. Chris who earlier hosted Oscars in 2005 can be expected to hold fort in his own inimitable style on the race related controversy and other issues. Matt Damon, nominated for Best Actor for his role in “The Martian,” arrives with his wife Luciana Barroso at the 88th Academy Awards. (Source: Reuters)

Performances: Unlike Bollywood, Oscars have only limited set of performances designed to thrill and not bore. You will see Lady Gaga performing on three best song nominees. Multiple Grammy award winner Sam Smith and Canadian singer Weeknd will also belt out their hits.

Hot contenders for awards: Oscars undoubtedly celebrates and awards the best of English cinema. The Revenant is the front-runner with 12 nominations including Best Actor and Best Director. Leonardo Do Caprio the man who has been unlucky at Oscars may actually end up winning it this time for his standout performance in The Revenant.

Leo has already pocketed both Golden Globes and Bafta. However, one can never be sure for Oscars are known for springing surprises and this time Leo has some stiff competition coming in from Eddie Redmanye (The Danish Girl) and Micheal Fassbender (Steve Jobs). In the best actress category, Brie Larson(The Room) is the leading contender and offering her a tough fight is Saoirse Ronan(Brooklyn).

Veteran Sylvester Stallone looks set to pick the Oscar for Best Supporting Actor for Creed. The big one that of the Best Picture has lined up some classics which will result in a tough fight. Mad Max- Fury Road and The Revnant are tightly place as are The Big Shot and Spotlight.

Top Places to visit in Dalhousie

Pretty! This was a really wonderful post. Thanks for supplying these details.