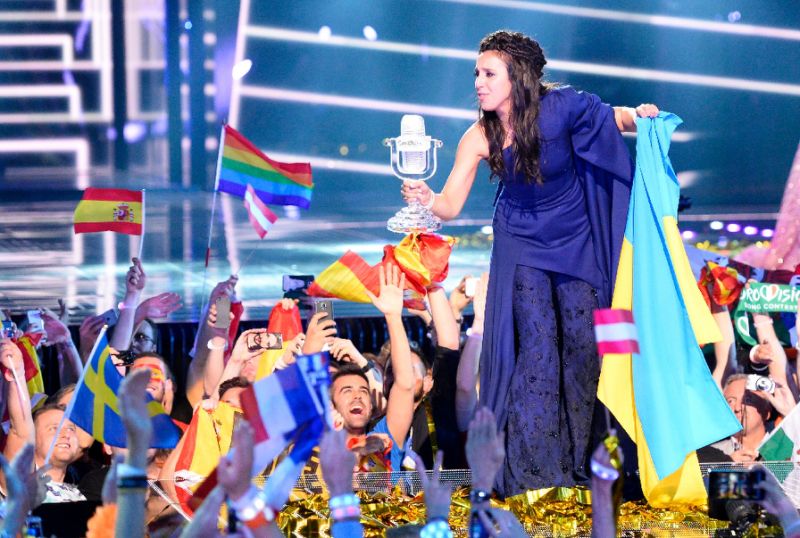 The 32-year-old singer made a plea for “peace and love” as she collected her trophy after beating Australia – which competed for the second time after appearing as a guest last year – into second place and Russia into third.

“Yes!!!” Poroshenko tweeted. “An unbelievable performance and victory! All of Ukraine gives you its heartfelt thanks, Jamala.”

Jamala is a member of the Muslim Tatar minority of Crimea who saw her great-grandmother deported along with 240,000 others by Stalin in the penultimate year of World War II.

Russia had earlier protested Ukraine’s entry in the contest because of its “political” subtext – a violation of the contest’s rules.

But Eurovision ruled that Jamala was “historical” in nature and allowed her song to compete.

The win means, under Eurovision rules, Ukraine gets to host the contest next year.

The consequences of Ukraine’s victory led one pro-Kremlin politician in Moscow to suggest Russia might boycott the event next year.

The result came as Ukraine held an annual day of remembrance for victims of political repression – including Soviet purges of Crimean Tatars.

The theme of this year’s Eurovision was “Come Together,” a subtle message for Europe to stay united amid a backlash against migration to the continent and rising nationalism.

Hosts Petra Mede and Mans Zelmerlow introduced a sombre mood to the contest by suggesting it would allow countries to “set aside any differences we have” as Europe faces “darker times”.

Some 26 finalists took part in the contest at Stockholm’s Globe arena which was watched than 100 million viewers around the world including, for the first time, viewers in the United States.

Graham Norton hosted the commentary on BBC One having taken over from his predecessor Terry Wogan in 2009. Norton paid tribute to Sir Terry who died in January, declaring that this year the contest was “bittersweet” for him.

“Eight years ago, when I was lucky enough to get this job of commentating, Sir Terry very kindly and graciously phoned me, and the only bit of advice he had for me was ‘Don’t have a drink before song nine’,” he said.

British contenders Joe and Jake limped home in 24th place out of 26th with their song You’re Not Alone.

Christmas Countdown With These 20 Festive Films

Bigg Boss 11 Winner Shilpa Shinde That Her Fans Would...

The Fast and the Furious 8 – Fans to Witness...