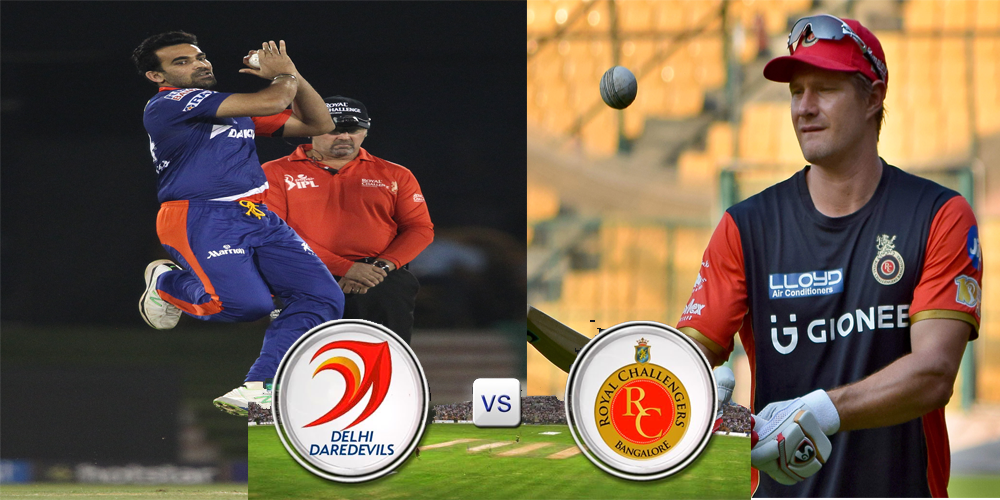 Royal Challengers Bangalore, who lost the first game against defending champions Sunrisers Hyderabad by a fair margin, would look to put behind the opening defeat and aim for their first win of the Indian Premier League (IPL) season 10 when they take on Delhi Daredevils at Chinnaswamy stadium in Bangalore on Saturday.

Royal Challengers Bangalore who lost their first match in IPL 2017, against last year’s defending champions Sunrisers Hyderabad are hoping for their first win in IPL season 10 when they will be facing Delhi Daredevils at the Chinnaswamy  on Saturday. RCB are stressed as their captain Virat Kohli, AB de Villiers and KL Rahul are seriously injured. Kohli and de Villars are expected to recover soon but Rahul has been ruled out of the entire IPL season 10 due to his serious injuries.

The talented youngster Sarfaraz Khan is also expected to be unavailable due to his injuries while fielding in a practise match.

The team would be led by not so in form Shane Watson. The team is expecting a smashing start against the weak DD with their key players like Chris Gayle and Shane Watson who have the capability to take down any opposition on their day. In the bowling side they have Tymal Mills and Yuzvendra Chahal as experienced bollower.

While DD being the worst side till date will be desperately looking for a few wins to get an early booster. But the scenario for DD is also not good with injuries of sime key players.

The team has lost De Kock for his tendon injury whiles his ODI against New Zealand and JP Duminy who has pulled out due to some of his personal reasons. The colourful Shreyas Iyer has been bed ridden and has been ruled out for a week due to chicken pox.

Elegant bowlers like Angelo Matthews along with Mohammad Shami have also been ruled out due to injuries.

Zaheer Khan who will be leading the team as well as the bowling side has not bowled well, so there are some questions regarding his performance. But the Daredevils have Carlos Brathwaite and Australian pacer Pat Cummins who are pretty well revised in the T20 format.

Royal Challengers Bangalore is hamstrung by the fact that some of their top players are unavailable and we think that Delhi has got a good opportunity to take advantage of this unsettled lineup. Back Delhi Daredevils to win.