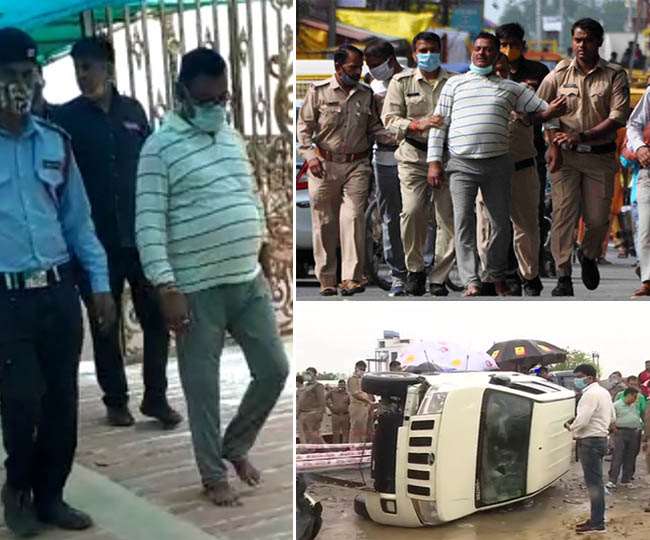 A span of 30 years with 62 criminal cases and five murders, the Gangster freely moved around the city with pride without any restrictions nor actions.How could he freely commit crimes when the Government and the police could have ended his reign long time back?

The Gangster has finally met his fate. He was shot dead in an encounter. The entire scene of the encounter seems no less than a plot of a movie, but the end remains unclear. How could the people from a fallen car come out without the doors being opened? How could no one get hurt and our gangster especially who could come out safe out of the vehicle which met with an accident, snatch a rifle and run for more four kilometres with his previously injured legs with his hefty body?Apart from this, the main questions which hit our brains are, how could a criminal’s hands remain free? Were they not locked/handcuffed when arrested? With all these questions hovering in the mind, the end of Vikas Dubey seems to be a plotted encounter wherein the plot missed to clear few scenes.

However, these questions come to the dust when we see a gangster who could have freed himself from the court or jail soon with money and power, meets his end before he could use his powerful cards. Our hearts never get emotional for a criminal who took so many innocent lives. The end of a gangster was necessary. But his end has left many questions whose answers would probably never be revealed. The powerful hands behind his growth for thirty years must be sighing with relief. The encounter could have been planned after the court hearings too, but the gangster was silenced before he could reach the court.

Indeed, the entire scene of his arrest to the end was highly predictable. Keeping away the political issues, if we can watch the end of Vikas Dubey, there is not an iota of regret or remorse. Every criminal must be wiped out before they can use their power in the courts to free themselves. Probably, if the police and the government stay alert and give equal treatment to all the criminals of the nation, our nation would one day become safe and sound for the people to survive without fear. It doesn’t actually matter to the public when justice is derived, if the encounter is accidental or planned. However, the truth must have its face too and justice with clarity is what we seek.The operations to end the reigns of every gangster from every corner of our country must continue if at all the Government aims to clean our Nation and provide justice to the victims.